In Vol. 3, we consider: what happens when the heart erupts? When body takes over performance, and when performance disrupts a canon? Or when yearning becomes radical, in spaces as small as a charpai? What happens when we bring out old photographs, neatly contained in floral-patterned, plastic-coated albums and gilded, musty frames? How do we dance to the music of separation?

Through a playlist of isolation, a roadmap for losing oneself to sound, provisional recipes from our kitchens, an essay on a dance-theatrical performance, a journey through the photo albums of Goa’s families—we explore the ever-changing forms of feeling. You will find videos of performances that will evoke responses—shame, nausea, horror, affinity, belonging. There are poems that will intrude into the personal, the ugly, the nerve-wrecking. And then, there is delight: at reciting and reading together; at the multilingual tongues of history.

Join us in feeling, as a refusal to forget. 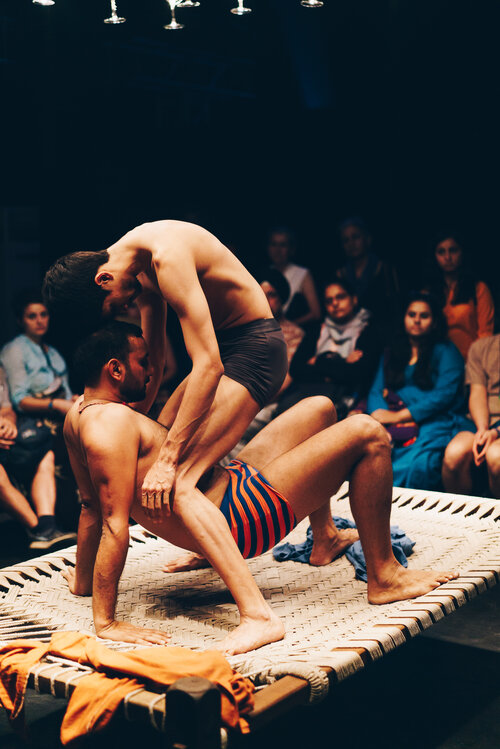 In Mandeep Raikhy’s Queen-size, there is…the juxtaposition of the personal and the political, as we, as audience, are drawn into the private space of two men engaged in a prolonged erotic encounter with each other. There is an almost direct metaphor here somewhere regarding the entry of the state and its laws into the bedrooms of its citizens. Conceived in some ways as a protest performance against the Section 377 of the Indian Penal Code (which criminalises what it calls “unnatural sex” between two members of the same sex), Queen-size remains, in title and execution, both deeply ironic and acutely earnest. We would do well to remember that Section 377 is the survival of a Victorian colonial law, which defined anything but peno-vaginal penetrative sex (always heterosexual and preferably conjugal) as against the order of nature. The “queen” in Queen-size may be an ironic reference to several things: the “queen” by whose reign such a law might be known, a wedding gift for properly-sanctioned conjugal sexual celebrations or the essential “queerness” of the performance before us, which distinguishes it from the straightforward masculinist and authoritarian nature of the “King Size.” “Queen-size” is assumed to be epithet for “bed”, but nothing is explicitly mentioned, so it could actually be a descriptive or metaphorical term for anything under the sun: people, their feelings or lack thereof for each other, a relationship, love, sexual pleasure… one cannot quite be sure.

he greatest irony is generated at the visual level, when, once within the space of the black box theatre, we find not, in fact, a queen size bed but a large “charpoy” or what is more commonly called khatiya. The khatiya here might be a desi comment on the imperial arrogance of the “queen size” or it might be a queer taking down of the heterosexual obscenity of mainstream Bollywood songs such as “Sarkai leo khatiya,” earlier referenced

in Sujay Saple’s production Agent Provocateur, where it had become an instance to demonstrate the hypocrisy of the Indian censor board. Lalit Khatana, one of the performer/dancers in Queen-size, whom I interviewed at length, told me that at one point in the rehearsals, he had begun to feel uncomfortable with some of the movements that were emerging from the devised

choreography. Even though he had done completely nude performances in Europe before, he had not been involved in creating this kind of intimacy on stage and it had begun to feel strange to him. It was, in fact, the charpoy that brought him back to the production. On the day that he had made up his mind to tell Raikhy that he could no longer be part of the production; he had thought of various ways he could explain it to him all through his journey to the rehearsal. On reaching the rehearsal space, however, Raikhy told him that he was looking for a charpoy for the production. Khatana immediately remembered that there were people near his locality who make charpoys, but one would have to buy the frame and the rope in order to make it oneself. As he occupied his mind with the problem of the charpoy, the exact nature of the frame and the material of the rope, Khatana found himself drawn back, along with these materials, into the life of the performance. It was, in a sense, this ironic, tongue-in-cheek, queer, desi bed that brought him back to reconnect with the production. He never mentioned or even felt any discomfort again.

*To read the essay in its entirety, kindly visit the Amazon links for Projects/Processes shared in this newsletter to purchase this, as well as other volumes focused on research and writing around Serendipity Arts Festival.

A playlist to soak in the strangeness of today, Social Isolation, is compiled by Varun Desai (Yidam on Soundcloud), music producer and media artist. Desai’s sound experience installation Emissions, created in collaboration with Viraag Desai, was showcased at Serendipity Arts Festival 2018.

From Varun’s desk: Created and compiled during the last week of March 2020, this compilation brings together the sound of artists in isolation creating music that’s reflective of our collective

struggle during the Covid-19 pandemic. Those featured in this edition are of Indian origin but we wish to continue the Social Isolation series with more submissions and create a worldwide artist-listener network. 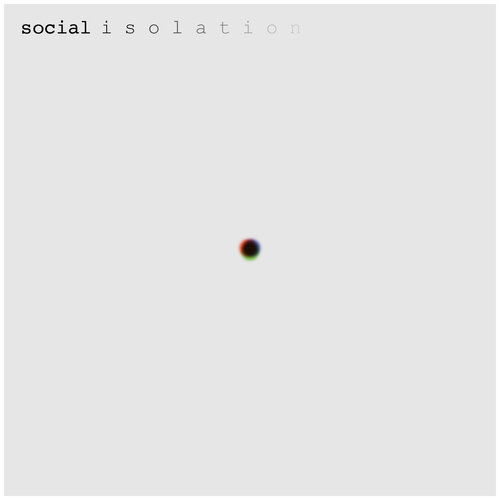 Autonomous Sensory Meridian Response is the new trend—a space of sensorial slowness and heightened sensibility, a salve to the abrasive rigours of the modern city. Farah Mulla, an alumni of Dharti Arts Residency 2019, and sound artist, suggests a few videos to explore the ASMR experience.

Here are a few articles that explain ASMR: ASMR In Current Times ; History of ASMR ; The ASMR Experience ; Psychology of ASMR

Farah explains that this video is a nice example of experiencing ASMR while cooking ramen at home from scratch. It incorporates active listening as an exercise while trying to bring your your attention to the present moment and the immediate environment.

The performance Transfiguration is the story of a sculptor’s unfulfilled desire to imbue his creation with life. In a gesture of despair, he enters in his material, clay, to give it life. He sculpts clay on his head, burying himself in the material, eradicating his identity and becoming a living work of art, somewhere between the puppet and the puppeteer. But then, the material blinds him and he is forced to look inward, into the very depths of his self.

In a fascinating, expressive, total performance, Sagazan shifts identities on stage, from man to animal or to various hybrid creatures. He pierces, erases and unravels the layers of his face in a frenetic and uninhibited quest. Painting and sculpting oneself becomes a form of ritual positioned between dance and trance, where improvisation is essential

The Wishful Fall project readapts past moments by the Lucifer’s Ensemble trio, recreating new pieces in a site-specific context, taking advantage of the space’s symbolic memories, aesthetic presence and acoustic properties— presenting a new performance that traces past rituals onto a hypothetical future, where the body is kept in-between.

How does one write of poetry in prose? Poorly perhaps.  How can we hope to find solace in times of continual turmoil? To live is to dwell in impossibilities, to admit into being the nearly possible. So, we endeavor to understand why we believe in the therapeutic quality of the poetic voice, if not form, nature, or intent. We are interested in the poetic voice as an invitation, into the circuitous routes that pain and love traverse, through and between bodies—much like the movement of a virus. Bodily ailments, conversational fault lines, desire and disease; how different is a rib that sticks out of place, from words mobilised to their entire emotive force? Is poetry holding us hostage to feeling? We present selections that speak of and about intimacy, the unsteady comfort of knowledge and recognition; of excess, the cycles of ripening and disintegration churning beneath the surface.

Plunge. There is no other way.

Not Even This // Ocean Vuong

We Will Rebuild Worlds // Meena Kandasamy

Nothing will happen between us // Aruni Kashyap.

Goa Familia is an initiative that is building an archive of people’s stories, through photographs and other memorabilia, as well as oral commentaries gathered through the participation of Goan families. The project is primarily about memory in its various definitions and manifestations, which spring from both personal and collective experiences.

the stories evolve around diverse moments recorded in albums and pictures; they transcend time and space while offering glimpses into multidimensional aspects of family histories that stand as quiet markers of societal transitions. Photography, as an intrinsic tool of documentation and visual archiving, represents these very transitions and the ever expanding possibilities of its own technical advancement over the decades. 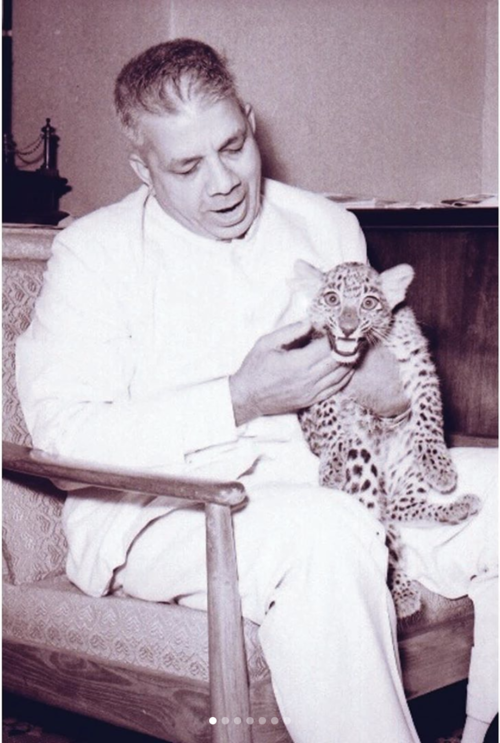 are underlying themes spoken about – interspersed with social, political, economic, religious, cultural and other inferences. Seen in today’s context, the project contends with fluctuating meanings of permanence and physicality as related to fragmenting paper and yellowing albums – and investigates notions of factual and staged reality. Photography is the thread that binds the varied trajectories of thought, articulating the unsaid and connecting peoples over generations.

Goa Familia is beginning to scratch the surface of a vast ocean of oral and photographic history, and invites families and individuals to share their stories with this evolving archive.

The project traces historically validated and underlying personal narratives that provide plural perspectives into understanding Goa as it is today. As much as they are about remembrance, photographs also refer to absence and loss, and acknowledge the act of forgetting as a valid response to the past. Recollections are frequently non-linear, with pauses and gaps that become open to interpretation. Intriguing linkages are often revealed in albums of unconnected families, while assumed relationships turn out to be false.  The project attempts to mediate these fragile networks in their existing forms, employing contemporary technologies to compile and safeguard community history.

The photo-memories range from significant and popular events in Goan public history, to obscure happenings and domestic occasions; from experiences embedded in local soil, to associations with rest of India and the world. Migration and dislocation, identity and belonging

A list of recipes, knacks, and other remedies from the kitchen for the sequestered soul.

Submissions are still open for our Create at home 500 word stories as well as 1 second films! Click the link below to learn how to submit your creations. 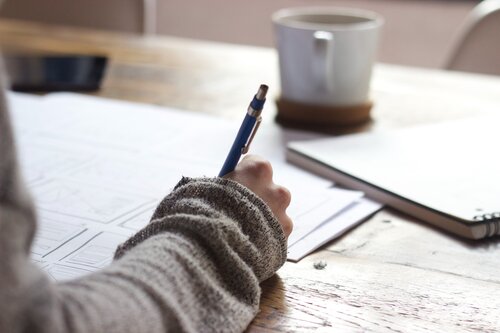 The Projects/Processes series commissions research essays, longform writing, and in-depth criticism that explore the ideas and processes behind select curatorial projects at Serendipity Arts Festival. Get a copy of the 2018 series, published by Harper Design by clicking on the links below.

Vol. 4 | Explorations of the Contemporary Missed Volume 1 of our newsletter? Catch up now with the link below! 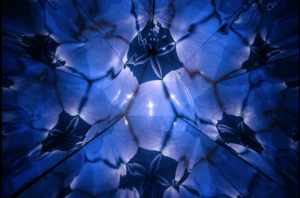 Take a look at Volume 2 of our newsletter here!

A playlist of ASMR sounds recommended by Farah Mulla

You can still submit your one second videos! Click the link below:

Listen to something different this week from these handpicked suggestions from the Serendipity Arts Staff!

Catch up on the first track from the Serendipity Soundscapes 2019 collection, titled Dil ki Baatein: Affairs of the Heart in Song, curated by Aneesh Pradhan and sung by Shubha Mudgal. The selection of Hindi poems set to tune specially for Dil ki Baatein hopes to bring to the listener a variety of expressions of love that have found place in poetry. The song, “Piyaa” is sure to fill your evenings with a soulful energy as Shubhaji’s powerful voice chimes in.