An Archaeology of Silence: The Aniconic worlds of Mrinalini Mukherjee 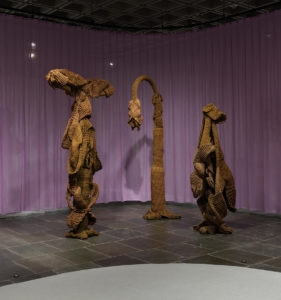 “Our job is to make the Anthropocene as short/thin as possible and to cultivate with each other in every way imaginable epochs to come that can replenish refuge”.

“But there is another reason why, from the writer’s point of view, it would serve no purpose to approach them in that way: because to treat them as magical or surreal would be to rob them of precisely the quality that makes them so urgently compelling—which is that they are actually happening on this earth, at this time”.

The recently concluded retrospective on Mrinalini Mukherjee at the Met Breuer has revived dormant debates: Was Mukherjee isolated or cosmopolitan?; Is this elevation of craft to high art, tapestries to sculptures? Scholarship by Tania Guha, Victoria Lynn and Grant Watson has explored how such conceptual dichotomies are ill-suited to understanding Mukherjee’s labour, which reveals a deliberate dialectics of thought and form.

Given the retrospective and the accompanied attention to Mukherjee’s practice has coincided with the articulation of substantive civic concern with climate change—it is tempting to ask if the works present ways of thinking on urgent questions of ecology and the state of our planetary futures. This essay is concerned as much with the formal content of Mukherjee’s art as with the question of what it means to engage with these works amidst a growing public discourse on climate change. 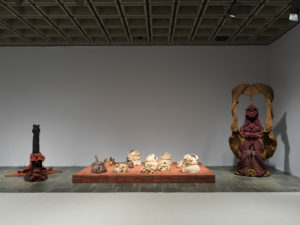 Installation view of Phenomenal Nature, Mrinalini Mukherjee at The Met Breuer, 2019. Courtesy The Metropolitan Museum of Art
Mukherjee (1949-2015), born to artists Leela and Benode Behari, grew up in the foothills of the Himalayas, and visited Santiniketan frequently, followed by degrees in painting and mural design at M S University, Baroda. She began exploring fibre as a natural medium for murals and tapestries before progressing to sculptural works. On being quizzed about what led her to select a rare medium such as natural ropes made of “san” or “shani”, which Mukherjee described as “close to hemp”, she remarked that it was inexpensive and easily available.1 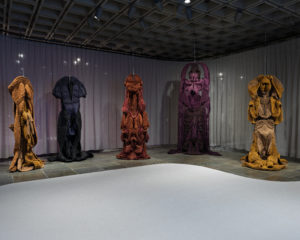 Installation view of Phenomenal Nature, Mrinalini Mukherjee at The Met Breuer, 2019. Courtesy The Metropolitan Museum of Art
She transitioned from fibre to ceramics, and eventually bronze (as a substitute for wax), producing sculptures that are dyed, knotted, glazed, or moulded in a distinct iconography that is tensile and taphonomic. Over four decades, she produced works of varying scale, materials and methods—structurally experimental, yet thematically cohesive. The retrospective, titled “Phenomenal Nature” curated by Shanay Jhaveri was an exhaustive survey of this corpus, showcasing works which have otherwise remained beyond the public domain. However, it was a remarkable departure from past strategies of exhibiting her works—Mukherjee’s monumental, vertical fibre sculptures, among other works, were ensconced in pastel curtains that appeared to float above ground as if suspended in aerial motion, ethereal and slight. Scholars such as Iftikhar Dadi have noted that the curtains added an air of theatricality, underscoring the dramatic import her works have always contained. In the presentation of works such as Black Devi (1980) and Pakshi (Bird, 1985), the curtains serve as a backdrop, heightening a scenographic impulse in her fibre-works and altering the spatial field of their presentation. While in the past smaller fibre works have been elevated on platforms, the retrospective placed these directly on the floor, surpassing the use of pedestals often deployed to signal a revered distance between the viewer and the exhibit. Hung vertically or splayed on the ground, the works appear either as portals or thresholds, inviting passage and urging trespass. One can speculate the impact of such display choices on the experience of viewing the work, but this much can be claimed—if this is theatre, its form is certainly of a promenade; we are spectators, and occupants. 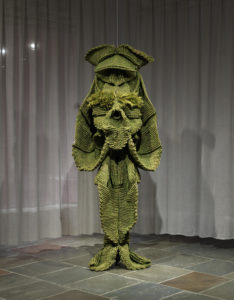 Installation view of Phenomenal Nature, Mrinalini Mukherjee at The Met Breuer, 2019. Courtesy The Metropolitan Museum of Art
Resonances with other aspects of theatre—staging, costuming, masks and accoutrements—is echoed in materials from Mukherjee’s personal archive, where Naman Ahuja has traced references to Kabuki, Theyyam, Kathakali and Noli.2 Among her fibre works the dominance of staging is most evident in Vriksha Nata (Arboreal Enactment), a careful arrangement of three sculptures, produced in 1991-1992. Sculptures such as Van Raja I and II (1991-1994) and Squirrel (1972) perform an ocular disorientation, presenting aspects of what is familiar to us, and what seems to be indescribably different. These forms have been considered, particularly in works such as Pushpa, as potentate representations of primal forces that animate the ‘essence’ of human life—spirituality and sexuality, the cycle of life and death. However there are possibilities to explore how Mukherjee’s artworks—specifically the fibre works—implicate the viewer and produce a feeling of estrangement, such that many have compared her sculptures to the non-human, delivering in effect a spectra of alterity: divine forces (deities), temporal residue (preternatural forms), hybrid figurations (an admixture of bio/zoomorphism). One could ask whether this identification of Otherness in sculptures that defy figurative comprehension emanates from an epistemic framework that privileges only certain constructs of bodies (the recurrent usage of “uncanny” in the scholarship on Mukherjee is telling). Mukherjee’s work is known for exceeding, and perhaps, transgressing the limits of “knowability” or what makes bodies tenable—it revolts against the “regulatory ideal” and the “affirmation by repetition” that produce our recognition of what is and what is not permitted to be a body. In Bodies That Matter (2011), Judith Butler argues that the construction of norms that governs the “materialization” of bodies, will also simultaneously create conditions of abjection, the “outside” of bodily legitimacy. For Butler, there are two arguments implicit in understanding that ascribing recognition to “bodies” is an act of power—there will always be that which is excluded from the fulcrum of this legitimacy (in fact, the abject serves the crucial function of asserting the form of legitimate bodies), and that to conceive of “nature” as a site or zone independent of social norms is facile. Butler quotes Derrida: “There is no nature, only the effects of nature: denaturalization or naturalization”.3 The “natural world” that we use as a reference to understand Mukherjee’s works is perhaps then, not an unmediated, extraneous, ahistorical entity, but something shaped and understood through an anthropocentric lens. It is possible to argue that in presenting forms—bodies, terrains, scenes—that repel immediate legibility, Mukherjee is demanding a not just a perceptual but a phenomenological shift in how we relate to and embody the world. 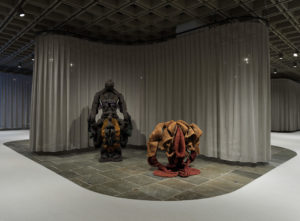 In the essay “Indian Roots for a Universal Idiom”Ahuja sieves through Mukherjee’s personal archive to present a photographic record of her visits across India and Southeast Asia, to temples and other sites of worship in ancient settlements, such as Hampi, Mahabalipuram, Ajanta and Ellora, Sitaranasal, Konark, Bhubaneswar. Mukherjee’s husband recorded the intricate facades of stone temples; figures of Nagas, Yakshis, Mithunas and Apsaras; and aniconic structures situated in the wild. The presence of foliage in these structures is regarded as intrinsic to the divinity of the site, and not viewed as encroachment or adornment. To Ahuja, the foliage and the structure are inextricable—the carvings and sculptures “emerge” from and are enframed by the vegetal expanse. He argues that through the rigorous documentation of the pastoral via photographic slides, and the production of three-dimensional sculptures that mimic the relief work on temple facades, Mukherjee is practicing “both an ethno-archaeology and a landscape archaeology in the contemporary”. This reading can be extended further to consider, does Mukherjee’s work and archive permit us to rethink the meaning of landscape itself?

Landscapes have traditionally been defined in a visual-representational plane, always accessed through the subjectivity of human presence. As much as landscapes have been viewed as mediated through the psyche, or in turn formative of human experience, in the study of art and photography it has been understood as inert—so much as the absence of human subjects is viewed as the reduction of pictorial function to a descriptive register that could be empty, or still. Landscapes exist as the domain of cultural and political practice, for W J T Mitchell, they are sites of power—and he has argued to shift the understanding of landscape from “a noun to a verb”.4 Mitchell states that the propagation of the contemplative gaze of the unencumbered subject of modernity has worked to conceal the imperial and industrial influence on the natural imagination from the early nineteenth century, where expeditions and excursions became symbols of annexation. As Karen Barad notes, our understanding of landscape as context for human activity has fundamentally shaped disciplinary tenets. She argues that “matter” is not, in fact, “little bits of nature, or a blank slate, surface, or site passively awaiting signification, nor is it an uncontested ground for scientific, feminist, or Marxist theories. Matter is not immutable or passive. Nor is it a fixed support, location, referent, or source of sustainability for discourse”.5 To view the matter as active beyond the human, driven as much by the biotic as the abiotic, is to think of the scalar impact of the Anthropocene, a period of intense human activity in the form of industrial and post-industrial processes, has propelled the extinction of landscapes, species and processes that may be difficult to revive. 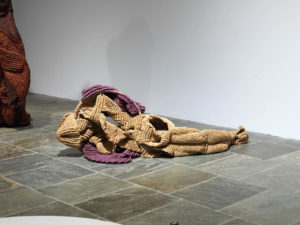 Installation view of Phenomenal Nature, Mrinalini Mukherjee at The Met Breuer, 2019. Courtesy The Metropolitan Museum of Art
How we understand the landscape is also a reflection of whether we recognise its simultaneous (re)formation by elements imperceptible to us. Farrier and Aeon reveal that like much of the abiotic substances, which may have anthropogenic origins, have far-reaching implications—such as plastic which appears “ostensibly inert, like Chernobyl’s ‘undead’ isotopes… are in fact intensely lively, leaching endocrine-disrupting chemicals. Single-use plastic might seem to disappear when I dispose of it, but it (and therefore I) will nonetheless continue to act on the environments in which it persists for millennia”. It is possible to situate in Mukherjee’s practice an affinity towards the discursive frame of deep time, “the immense arc of non-human history”.6 The biomorphic strain in her works has often been read in the vein of primordialism, but as Ahuja notes, “Mukherjee is no nostalgic conservationist”. That her sculptures revolt—at the level of definition and form, that they appear as event and as rupture, gestures towards a new poetics of being. Perhaps, the estrangement generated in confronting Mukherjee’s sculptures is a call to what Donna Haraway terms as “making kin”, a rethinking of relationality and responsibility that extends beyond genealogical, biological and species kinship. In the midst of the Anthropocene, the art of Mrinalini Mukherjee demands disruptive regimes of relational ethics, with radical implications for the notions of possession and belonging. What we owe, in confronting, the mythic-named figures of Mukherjee’s work is not awe, terror or splendor, but kinship—an exploration of the “more-than-human” world from beyond the location of bounded individualism. Consider again, the construct of the works produced from fiber, which are perforated and sinuous, held upright or slumped on the floor, assembled to present lifeworlds that seem within reach, perhaps right beneath our skin.

Arushi Vats is a writer. She is interested in studying forms of capital, labour and eco-political consciousness in art and literature. She has written for Scroll and Quint in the past and continually worships at the altar of feline beings.