An excerpt from a letter Vincent van Gogh wrote to his brother Theo van Gogh: “What am I in the eyes of most people – a nonentity, an eccentric or an unpleasant person – somebody who has no position in society and never will have, in short, the lowest of the low. All right, then – even if that were absolutely true, then I should one day like to show by my work what such an eccentric, such a nobody has in his heart.” He sold only one painting while he was alive: The Red Vineyard, which went for 400 francs. After his death, his most expensive painting: Portrait of Dr. Gachet was sold for $148 million in 1990. There is another common feature among van Gogh, Raja Ravi Varma, Manto, and various others; apart from the path breaking work in their domain of art. They lived through tough times in doing what they did, but now stand celebrated. Being termed inappropriate, vulgar, or even blaspheme, their work transcended the constraints of censorship. The society which receives art, often questions and confines art; according to its comfort in conforming to set norms, or the fear of privileged forces. Historically, the society has been rather reluctant in crossing its social boundaries. Performing a play on Manto’s or Ismat Chughtai’s stories is finding acceptance and celebration in the contemporary Indian mainstream. During Manto’s lifetime, he was tried for obscenity six times, thrice under the British government and thrice by the Pakistan government. He was even charged (later acquitted) with a fine of PKR 300 and six months of rigorous imprisonment as a judge felt that his story was obscene in accordance with Quranic standards.1 However, the cause of a stir against him was that he openly condemned the India-Pakistan partition which went against the dominant sentiment of that time. Similar was the struggle with Chughtai who decided to stay back in India after partition. Ironically, their stories once tarred as vulgar and put under a legal scanner by the authorities have now become stories of bold, free and enlightened expression. Through this, one can assume that the term “vulgarity” seems considerably subjective. What is vulgarity? One of the phrases in Wikipedia is: The quality of being unrefined or coarse. One can then assume that vulgar art is unrefined art! Further, why classify an art expression as “unrefined”? One answer can be because the “Rasa” or emotion produced within the receiver is “Bibhatsa” or disgust. Why question and categorise Bibhatsa when it hails from the same Navarasa2 paradigm where every rasa is given equal weightage? Natyashastra which is one of the earliest Sanskrit treatise on performing arts principles, mentions “Prekshaka”, which is also referred to as “Sahridaya” in Sanskrit poetics, a term coined for the spectator of an act. By contextual definition, Sahridaya means a person connected to the one on-stage, whose heart travels in the journey together. Interestingly, researchers at The University College London Division of Psychological and Language Sciences have found in a new study that audience’s hearts synchronize watching live theatre.3 Basically, the audience is the one receiving performer’s “bhava” (emotion felt) and receiving this generates an emotional state or rasa within them. There is a trigger, or a condition, which excites the affect, which is called “vibhava”. The vibhava is the cause (karana) of the affect (bhava). It is composed of the excitant (uddipana) and the supportive perception (allambana). Ayurvedic psychology places more emphasis on this supportive perception (allambana).4 Thus, once the bhava is received, it is the receiver’s or spectator’s conditioning which sees vulgarity in it, i.e it is the receivers’ interpretation of what they perceive that gives them a sense of vulgarity. The audience and artist together create a sense of vulgarity through shared experiences. 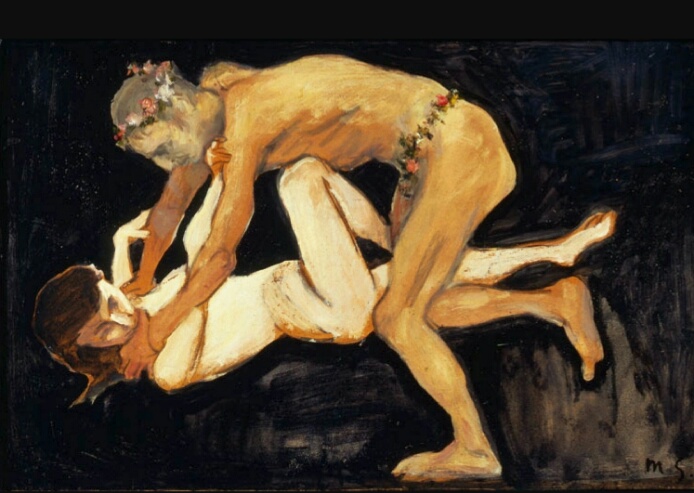 Painting: Faun and a Girl by Max Slevogt Source: Wikicommons

If vulgarity is unrefined or coarse then why do artists bother (if at all they do) intentionally imbibing it? Antonin Artaud’s “Theatre of Cruelty,” sought the ridding of humankind’s repressed energy and rejuvenating them as its purpose. Artaud says in his seminal work The Theater and Its Double (1938), “The theatre will never find itself again except by furnishing the spectator with the truthful precipitates of dreams, in which his taste for crime, his erotic obsessions, his savagery, his chimeras, his utopian sense of life and matter, even his cannibalism, pour out on a level not counterfeit and illusory, but interior.” The inherent repressed desires of mankind are realised through vicarious thrills—be it the gladiators in Rome combating to death, or twentieth century circus where women dressed in raunchy clothes and leaned their heads inside a lion’s mouth. One may smile, make faces or puke through the performance but the eyes want more!

In 1974, Marina Abramovic, a performance artist from Serbia created a performance called Rhythm 0. During the performance Abramovic became willfully passive and stood quietly in the gallery for six hours, during which audience members were invited to use one of 72 objects placed on a table to interact with her. The objects ranged from feathers, chocolate cake, roses, to a pair of scissors, a knife, a gun, bullets and chains. Initially, the audience started with placing a rose in her hand, kissing her, and feeding her cake. It was soon followed by taking scissors off the table and cutting off all her clothes, a man trying to rape her, another loading the pistol and pointing to her head, another man cutting her close to neck and drinking her blood. She stated, “After six hours, which was like 2 in the morning, the gallerists came and announced that the performance was over. I started moving and start being myself, because until then I was there like a puppet just for them, and at that moment everybody ran away. People could not confront me as a person.” 5 To see a silently standing artist, and however anointing or disfiguring her was at the audience’s discretion alone. 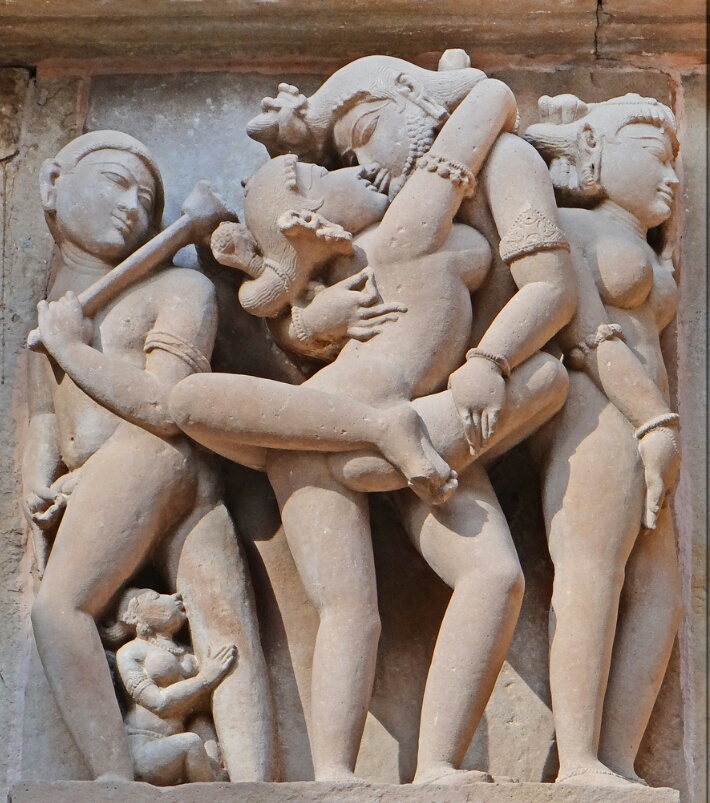 Erotic Kama sculpture at Khajuraho temple Source:Wikicommons In Indian art, an appropriate example can be the interpretation of Kama Sutra, which is supposedly a guide to the art of living well, the nature of love and other aspects pertaining to pleasure-oriented faculties of human life. When faced with the contemporary reality, the relevance of it is reduced to a sex manual. It is both highly frowned upon, and yet a devoured read in dark nights. Further, the temples in Khajuraho boldly hoist the documentation of Kama Sutra as understood in the Chandela period. The erotic carvings on the temples are highly complex and detailed. For instance, there are apsaras6 who are shown bathing with water droplets clearly visible, some shown dancing, painting and undressing with exasperating facial expressions. Popular depictions are ones in which the sculptures depict plural congresses, standing coitus, men engaging in bestiality with their horses and women indulging in self-pleasuring activities. The temples attract heavy tourist footfall throughout the year.7 In a section of society, where the mere mention of these terms is tagged vulgar, it leads to myriad interpretations.  It may be eroticism, philosophy, or love for history and art, but the sculptures on the temple spires don’t fail to catch eyes. One can choose to see the amount of labour, skill and aesthetic value of what appears in front of eyes or can draw vulgar or crass notions about it. In conclusion, art is simply an individual’s expression in response to their life, whether there’s vulgarity imbibed is a matter of the social context that it is viewed or consumed in. Further, instead of detesting vulgarity, it needs to be acknowledged and embraced as a part of life. Acceptance of subjectivity may lead to acceptance of art as it is. Nasadiya Sukta or the Hymn of Creation from Rigveda, an ancient Vedic sutra states in the last verse about the beginning of universe—only the highest supreme may know, but even he might know nothing at all!

I would want to formally credit institutions like Jawahar Kala Kendra, Jaipur and National School of Drama Extension Program Department, New Delhi for making theatre accessible and giving proper insights into allied arts through exhibitions, talks, events and recent workshops hosted in various parts of India. I acknowledge Pooja Sood who served as Director General of Jawahar Kala Kendra from 2015 to early 2019 for introducing Rajasthan to contemporary Indian art stalwarts and providing a liberal definition to the way art is seen. Also, I credit Archaeological Survey of India for maintaining museums and heritage sites across India, which act as pure and direct centers of learning.
Header image: Raja Ravi Varma’s oil painting depicting Shanthanu and Matsyagandhi Source: Wikigallery.org

Rohit Agarwal is a practicing theatre artist based out of Jaipur, Rajasthan. He graduated as a Software Engineer and then moved on to complete Diploma in Creative Writing in English. Having avid passion in travelling and finding reason in art, he has been travelling throughout the country attending workshops to gain insights into multiple arts that fall under the umbrella of theatre training: Kalaripayattu, Dhrupad, Tai Chi, Butoh, Psycho-physical being examples. His main domain lays in Physical Theatre and has co-directed couple of performances in the same. His work is self conceived and primarily structured improvisational. He aims at creating his own pedagogy in theatre which is raw, original, inclusive and expansive. For him writing has always run parallel, with forms of expression taking shape as poetry, short stories, articles and plays. In initial years it served him as personal relief and now it manipulates itself as professional one.