REQUIEM FOR THE FUTURE

In May 1942, Japan dropped the first bomb on Imphal, the capital of the then Princely state of Manipur. The second bomb followed within the week. The Allied British campaign against Nazi Germany and Imperial Japan was bolstered by the military, industrial and financial facilitation provided by colonized India.1 The subcontinent served as a base for American operations in support of China, both Allied Nations as well. The Second World War—which was accompanied by heinous events like the Holocaust, orchestrated famines and the novelty of nuclear weapons in combat—resulted in the defeat of the Axis powers and marked the beginning of the Atomic Age.

While the residents of Imphal were fleeing their homes, refugees from Japanese-conquered Burma and the retreating soldiers of the British Indian Army were streaming through Manipur en route to Dimapur and Silchar, in what comprised the territory of Assam then. Imphal, being on the frontline of the British-colonised India and the Japanese-colonised Burma, found itself in a precarious predicament. It witnessed a surge in construction of airfields and army bases by the Allies who claimed air superiority in the Burma Theater. After the area was completely cut-off by land, the Allies used their privilege to provide supplies to their troops by air for months on end, while the Japanese soldiers stranded in the area gradually perished. The Battle of Imphal and the Battle of Kohima became turning points in the “South-East Asian Theater of World War II” and the campaign against the Allied Forces. The Japanese Army, which had formed a minor alliance with the Azad Hind Fauj or the Indian National Army under Subhash Chandra Bose, planned on conquering the Indian mainland and cutting off the supply route to China. This mission was named “Operation U-Go.” But the relentless monsoon proved to be a hindrance in the replenishment of supplies, forestalling the Japanese attack. The consequent starvation resulted in the Japanese defeat by the British Indian Army. Had the operation succeeded, the Allies would have faced a devastating blow and history would have taken a different route towards the present day. The British Indian Army lost around 17,000 men while Japanese losses⁠—which also included INA troops⁠—are said to have amounted to more than 60,000 casualties.2 Muralidhar Sharma, an employee of the Public Works Department, was one of the thousands of civilians who were made to evacuate and abandon their homes in Imphal within a few hours. He lived to witness the people of his land fighting a war against each other for a purpose that did not make sense even to individuals who were convinced to fight imagined enemies.His grandson, Bheeshma Sharma, a recent post-graduate from the Sculpture Department at Maharaja Sayajirao University, Baroda, grew up listening to stories of the struggles faced by his progenitors. His oeuvre explores the incessant violence and devastation caused by man-made catastrophes—from annihilating wars to global warming—and embarks on a quest to make sense of the world in turbulent times.
One of the artist’s toys from childhood was a remnant of a Japanese bomb shell which possibly played a role in the destruction of his familial home, and which perhaps explains his fixation with metal. The fact that the very same metal which is used to build the foundation of a house in order to make it stronger, is also used to make the bomb that could destroy it within seconds, is not lost on Bheeshma. He welds small pieces of scraps together, bit by bit, wherein the metal is recycled, refurbished and resurrected in the form of his work. The home in which Muralidhar grew up was a humble structure of tin and wood in a corner of a large compound mostly occupied by a garden. He plucked mangoes straight from the trees planted here during his heyday. The forest nearby was believed to be inhabited by monsters and ghosts whose alleged existence was used as a threat by the adults to make sure the children behaved. Rapid modernization during and post the Second World War resulted in the building of highways, bridges and tarred roads over such childhood memories, denying further generations these experiences.
An earthquake of 6.7 magnitude struck Imphal in 2016, wreaking havoc on the artist’s hometown. Although his family was unharmed, an inexplicable fear led the artist to deeply corrode parts of a metal plate—a distorted map of the world, it reflects the repeated corrosion and distortion of his own memory of home. In another work, a mountain made of marble depicts the view from the window in his room in Imphal. The once tranquil landscape is symbolically wrapped in barbed wire, afflicted with the violent consequences of man’s enterprise. Excessive construction has led to the loosening of the soil causing nature to retaliate with frequent landslides. In essence, the work titled Contaminated House (2018-19) has everything—a roof, multiple rooms, an electricity pole suggesting its connectivity to a larger network, negating its isolation from the rest of civilization—and yet, it is bereft of any sign of life. It appears to be haunted by its own history or lack thereof. The abandoned construction premeditates the abandonment of the planet. Where will we go when we have razed our own world to the ground? Red Planet (2018-19) refers to the ongoing explorations on Mars to gauge its viability or potential to support human life, which is not such an alien concept anymore. In our desperation, we have started looking towards and embracing the “alien.” Maybe it makes us feel less alienated in our own world, in our own lives. 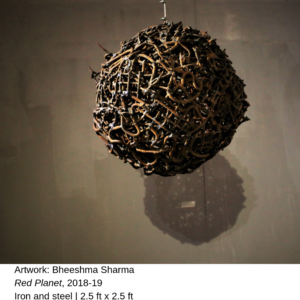 The history of his family piqued Sharma’s interest in the impact of war around the world. He conjures a post-apocalyptic landscape in Contaminated Zone (2018-19) treaded on by the “liquidators”—a term used to refer to the people who were hired, in effect sacrificed, to clean up the radioactive mess resulting from the accident at the nuclear plant in Chernobyl, USSR, in 1986. The only accident in the history of commercial nuclear power to cause fatalities from radiation, it was the result of flawed mechanism and lack of adequate safety measures.3 Exposure to radiation condemns people to isolation the way we are all condemned to an isolated life—we came alone, we will go alone. Most of the elements in his compositions serve to cause discomfort—sharp edges of the trees, barbed wire, gas masks. The figures were made using the dhokra or lost-wax technique which was practiced in the subcontinent as early as the Indus Valley Civilization. However, after coating the molded clay figures with wax, the artist observed that the wax mimicked the appearance of melting flesh and chose to leave the process unfinished. 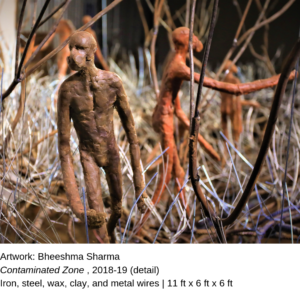 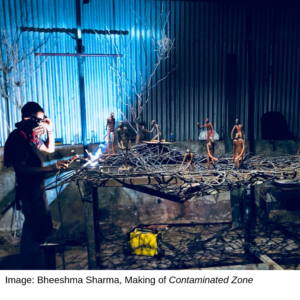 After the Second World War, battleships were declared outdated as the new aircraft carriers took precedence in the navies. Manufacturing was halted and tons of metal was scrapped and forgotten like lost history. Today, the time to render something obsolete is reducing expeditiously. Who Owns the Biggest Gun (2018-19) is a comment on the futile race in which we are all partakers, one that diverts us from the real problems—the advancing Holocene extinction; the rising sea levels; the thawing permafrost; and other “ferocities”4 of global warming. 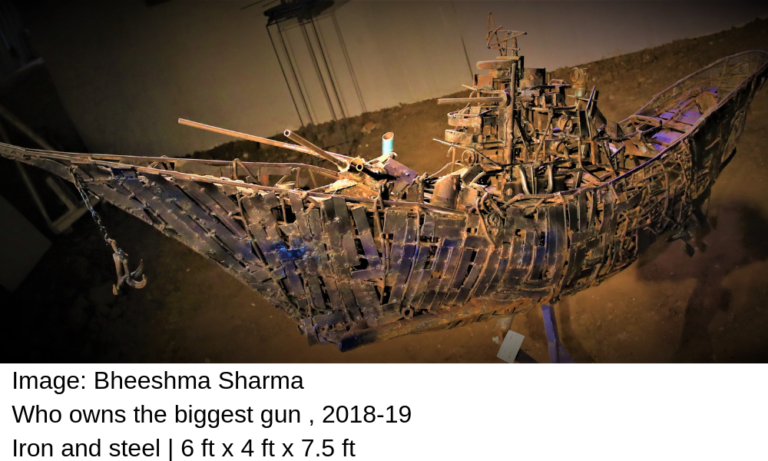 In the midst of building potentially habitable planets, war ships and dystopic landscapes, Sharma often goes back to simpler objects from a simpler moment, like the lantern, which is still used in his hometown. Times are changing rapidly where the only way to cling on to our sanity is to keep dipping our feet into cooling pools of nostalgia. All these works echo a common truth that man is not the kind to learn from his mistakes. He is adept at placing his hope in the wrong places—hope for more power to wield, hope for more ground to conquer, hope for more energy to exhaust, hope for more ammunition to use against each other. Hope for simply “more.” Perhaps the artist finds his sublimation in situating himself in a ubiquitous role—he is at once mankind, the nuclear bomb, as well as the contamination; the creator, the creation, and the destruction.

Priyanka Tagore is currently pursuing a Masters degree in Art History & Aesthetics at Maharaja Sayajirao University, Baroda. She has previously worked for a private collection, Swaraj Archive (Noida), for four years as an archivist, researcher, programmer, and content writer. She holds a B.A. degree in English Literature.