It is a truth now universally acknowledged, not least in recent articles in The Guardian and the BBC that the extinction of plants spells “bad news for all species,” and is being rapidly exacerbated by human destruction of the natural world. According to Dr Rob Salguero-Gómez from the University of Oxford, plants provide us with “food, shade and construction materials,” as well as “‘ecosystem services’ such as carbon fixation, oxygen creation, and even improvement in human mental health through enjoying green spaces.”

With the irreplaceable role of plants in our lives and surroundings, it is no surprise that artists have continually depicted the botanical world for both aesthetic and documentation purposes. Poised between art and science, botanical art has both aesthetic and utilitarian value. In India, this genre is largely associated with the Kampani (Company) school of painting, a naturalistic Indo-European style that became prevalent in the late 18th century when the East India Company sought to document the flora of the country. But depictions of plants go back much further in Indian art history, and were seen “on temple walls, pottery designs, motifs on woven carpets and embroidered textiles, […] illustrated folios from medieval manuscripts of Hindu epics,” and detailed in highly stylised forms in miniature art.

It is not only plants that face extinction. In Marg magazine’s recent issue (December 2018 – March 2019) titled Ars Botanica: The Weight of a Petal, historian and curator Sita Reddy says, “Today, with botanical art disappearing by the archive, and trees, forests or entire ecosystems at the whim of a malicious executive order, it seems more urgent than ever to compile some of these dispersed art historical resources. To refigure the botanical archive.”

While Marg drew attention to the rich, vibrant and largely unacknowledged history of botanical art in India, this essay seeks to explore the work of three contemporary Indian women artists who use plants as a motif, medium and metaphor to comment on issues of both personal and global significance. Belonging to a generation that has been educated in various sciences, the “diversity of interest [of these artists] allows for an exploration of the transcultural through the lens of the sciences, which function in a “universalist” sense wherever science is practiced – even if context favors one direction over another.” Incorporating but looking beyond aspects such as documentation and revival, the artists explore the botanical as an inquiry and a recreation of memories, reminding us of the value of our ecosystems and why we should be concerned about their loss.

GARDENS FROM THE PAST

For Samanta Batra Mehta, nature is “a metaphor for the body (and vice-versa) and as a site for germination, nourishment, degradation, trespass, plunder, colonisation and transgression.” Though the plant forms she depicts are an artistic rendering rather than an exact replica, they are informed by historical botanical illustrations, and by observing the plants in places where she has travelled and lived, including Mumbai and New York.

Mehta also draws upon accounts and memories of the ornamental and kitchen gardens created by her grandfather – a botanist, college professor and agricultural scientist who fled violence during the Partition of 1947 – which he had to leave behind and eventually nurtured again in North India. Mehta says that “these fantastical gardens conjured by my families’ collective imagination, the larger debates underpinning them and themes in my own migration to New York appear frequently in my art.” She pays homage to her grandparents’ journey in Return to the Garden, 2019, where she “transcends time” by superimposing botanical and anatomical drawings, symbolising life, in red ink on vintage photographs and antique book leaves. 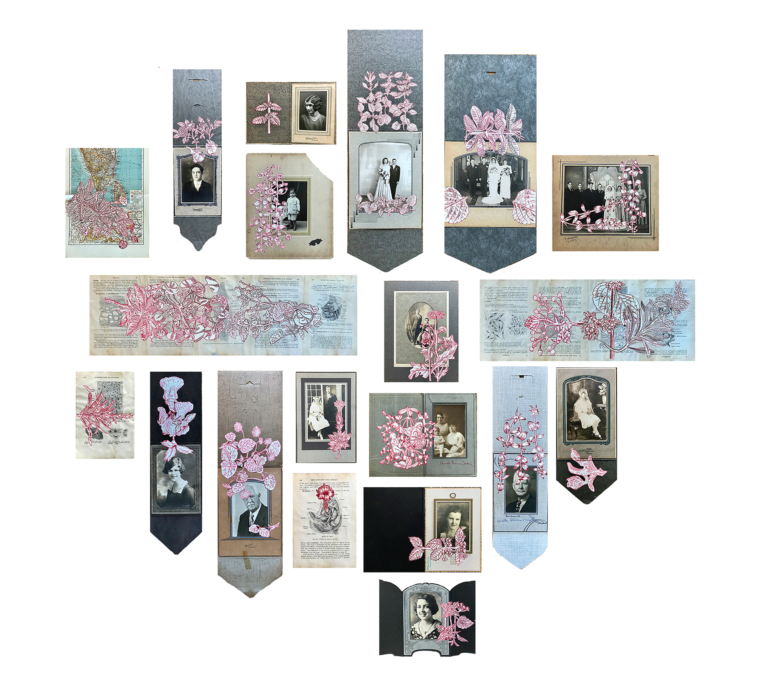 Samanta Batra Mehta, The Language that I Know, 2013, mixed media on paper, 4-part series with each part 11 x 15 inches. Photo courtesy the artist and Shrine Empire Gallery, New Delhi.
As such, plants in her work become a symbol of temporality and connection across time, and of the body with the natural world, also seen in Mehta’s earlier works such as The Language That I Know, 2013 and Silent Witness, 2010. In 2020, she will participate in a residency in Wave Hill, a public botanical garden in New York. She said, “While exploring Wave Hill, I was delighted to discover several plants that you see in Mumbai such as ficus, dracena, elephant ears in their greenhouses. I also discovered the powder puff plant (calliandra emarginata) there. My botanist grandfather cultivated the same calliandra plant in his gardens in North India. This plant has become an emblem in much of my artwork centered around themes of memory, migration, identity and personal history.” The ephemerality of memories and the need to preserve them are themes also explored in the work of Sumakshi Singh. Her series In the Garden and Leaving the Terrestrial: Its Own Kind of Archive feature delicate flowers and plants made of thread and wire, held in glass bottles and frames or levitating above the ground. The artist has said, “I just started making flowers and plants in embroidery, didn’t understand why […] It was only later that things got clearer as to why I was doing what I was doing. My mom would press flowers in between pages and send it to me by post. I was trying to flatten out, archive, preserve and record the memories.”

Sumakshi Singh, In the Garden 2 (detail), 2016, stop motion animation projected on screens and botanical forms. Image courtesy the artist, shown at Saatchi Gallery, London
In the Garden is Singh’s ode to her mother’s garden, as well as the garden planted by a Swiss friend, both of which outlived their creators and are resurrected in a gallery through Singh’s immersive art. The series includes stop-motion animations of plants, birds and fireflies projected on transparent screens, allowing viewers experiential access to these gardens, to which they will bring their own array of memories and emotions. At the same time, as with the skeletal thread forms, the viewer is constantly aware of walking through a surreal but transient experience, like living in someone else’s imagination. Leaving the Terrestrial takes this a step further, where imagined plant and maritime specimens are exhibited in the style of a mock natural history museum. The natural world becomes a reminder to be present, appreciate and preserve.

A GREENHOUSE OF POSSIBILITIES

Rohini Devasher has set herself the task of contemplating, even anticipating, alternatives and futures. In many of her works, she imagines “what might always have been, but perhaps we never looked closely enough.” She views the botanical world as a site for confrontation, memory-making, self-reflexiveness, as well as “a pointer to something else” – her practice often explores the idea of a nature that “looks back […] that is non-passive, in turn idyllic, uncanny, threatening, and seductive […],” she says. 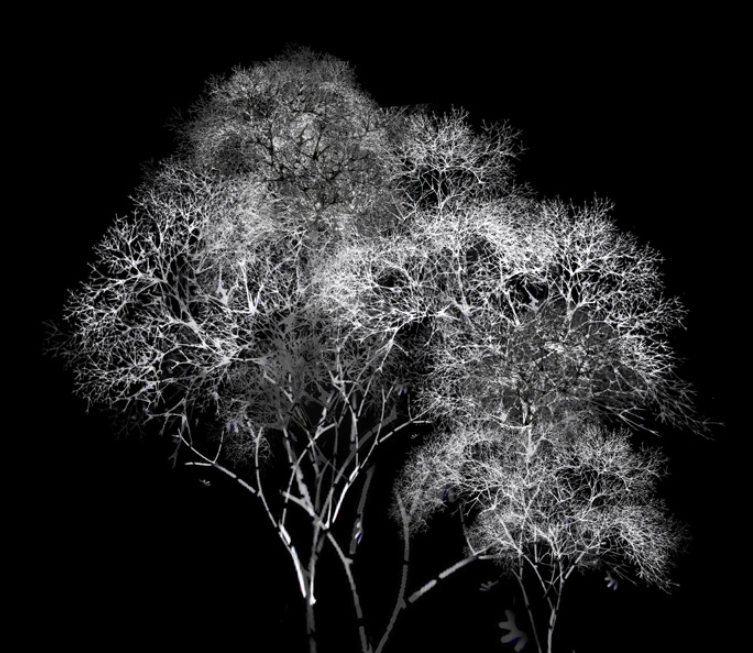 Elsewhere, Devasher said that she had been “exploring some ideas put forward in Goethe’s Botanical writings in which Goethe’s search for “that which was common to all plants without distinction” led him to evolve a purely mental concept of the archetypal plant. This archetype, when translated into art by some of his followers, resulted in what one writer has described as a ‘botanist’s nightmare’ consisting of all known leaves and flowers combined around a single stem. […] What result are hybrid organics that float in a twilight world between imagined and observed reality…forms in constant flux, in a state of continuous transformation. They could be denizens of a science-fictional botanical garden, specimens in a bizarre cabinet of curiosity or portents of a distant future.”

Interested in patterns, Devasher thinks of the botanical as a way to explore the mathematical in an engaging manner. In Arboreal, 2011, a video and photography-based work, the artist draws upon the Lindenmayer system of modelling plant growth and development. The recursive nature of the system creates branching, or fractal forms reminiscent of trees in the natural world. According to an exhibition statement by gallery Nature Morte, “If we consider the Arboreal video to be the archetype or ideal tree, then the Arboreal prints are a window to the other trees that could also have been. Once again these are generated by the layering of selected still frames of video, stacked one on top of the other. What results is a digital forest, a greenhouse of possibilities.”

The speculative or science-fictional perspective is explored in works such as AtlasPhaenogamia or the Atlas of Mimetic Flowering Plants, 2018 and the Genetic Drift series, which are as much about botanical accuracy as subverting it to consider a new visual vocabulary altogether. Atlas draws from specimens found in the R. L. McGregor Herbarium at the University of Kansas, deposited as far back as 1893, but the artist alters them to resemble varied animal forms. The process of creation involved photographing the specimens, and then modifying the images using Photoshop, pencils and acrylic. The series Genetic Drift presents hybrids – layered composites created using nearly 300 photographs and drawings collected by the artist in botanical gardens across the world. Rohini Devasher, Genetic Drift: SYMBIONT I – Hymenoptera Magnoliophyta (wasp flower), 2018, drawing on archival pigment print, 60 x 80 inches. Image credit: Rohini Devasher, courtesy the artist and Project 88, Mumbai.
Rohini Devasher, Atlas Phaenogamia or the Atlas of Mimetic Flowering Plants (Page 3). Image credit: Anil Rane, courtesy the artist and Project 88, Mumbai.
Through such works, Devasher seeks to make the familiar strange, and questions whether our ability to imagine is based on what we see around us, and limits how we respond to a crisis. She explains, “Strange-ing as a practice explores the inter-connectedness of our relationship to the planet and offers a perspective that may be useful to our imagination of our future in both shaping and living within it. When walking a fine line between wonder and the uncanny, it can change how we see the world.” And in a fast-paced, ecologically precarious world where the inconceivable is rapidly coming true, both perception and perspective are essential to working towards a future where the only gardens aren’t those from imagination or memory.

Kriti Bajaj is an Editorial Manager at Saffronart, a leading international auction house specialising in Indian art. She has been an arts and culture editor and writer for over six years, and was previously Managing Editor of Art Radar and Asia and Europe Copy Editor at Blouin Artinfo. From 2016 to 2018, she mentored students and professionals from all over the world enrolled on Art Radar’s online Certificate in Art Journalism and Writing course. Her articles have appeared in publications such as Aesthetica (UK), The Hindu (India), The Calvert Journal (UK), Tribe (Dubai) and Cotonoha (Japan). She lives and works in Mumbai.
Header Image: Samanta Batra Mehta, The Language that I Know (detail), 2013, mixed media on paper, 4-part series with each part 11 x 15 inches. Photo courtesy the artist and Shrine Empire Gallery, New Delhi.